Plagiarius 2019: the mock award for the most brazen counterfeits

The Plagiarius award was presented on 8 February 2019 at the Ambiente trade fair in Frankfurt am Main. This mock award is given to the ten most shameless counterfeits from the past year. One of the "winners" was a Chinese counterfeit model of the CWA 200 coolant pump from Pierburg. This pump is successfully offered on the independent aftermarket by its sister company Motorservice. 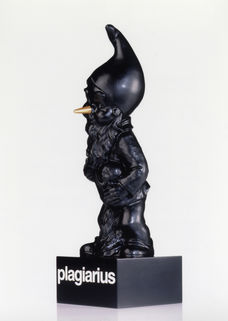 The Plagiarius trophy: a black gnome with a golden nose 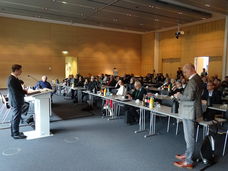 At the Plagiarius award ceremony, Oliver Hurtz warns of the dangers of sub-standard counterfeits of the CWA 200 coolant pump

The original coolant pump is on the left; the fake is on the right

Product managers at Motorservice uncovered counterfeit models of the coolant pump as early as 2014. Motorservice issued a product warning, patent holder Pierburg brought an action and won. In 2018 Oliver Hurtz, Lead Product Manager Mechatronics at Motorservice, made another find at the Automechanika trade fair: This time, he discovered two counterfeits of the CWA 200. Motorservice took legal action once again. The pumps had to be removed from the two trade fair stands on the following day and Motorservice was awarded compensation. The coolant pumps were forbidden from being sold by law in both cases.

Placed in the spotlight
By applying for the Plagiarius 2019 award, Motorservice made the deliberate decision to raise public awareness of the issue: "For us it's about making people aware of the problem. We want to protect our customers and ourselves from these ruthless product pirates," highlighted Oliver Hurtz in his acceptance speech at the awards ceremony. Tests on the company's test rigs ultimately showed that the counterfeit offered poor performance and the electronic components were defective. If the pump were to fail, the engine would overheat and this could result in severe consequential damage, Oliver Hurtz continued. For the award jury, the counterfeit was so brazen that they considered it one of the ten most shameless product fakes from all the submissions. If you would like to see the crude counterfeit for yourself, the coolant pump and its fake will be shown in the Plagiarius Museum in Solingen from 15 February. This museum exhibits more than 355 Plagiarius award winners from numerous different sectors.

The Plagiarius competition
The Plagiarius competition was launched by designer Prof. Rido Busse and was awarded for the 43rd time in 2019.   The association responsible for the prize (Aktion Plagiarius e.V.) has been awarding the dreaded "worst-of" award to manufacturers and retailers of particularly brazen counterfeits and fakes since 1977. The aim is to draw public attention to the crude and unscrupulous business practices of product and brand imitators, and to raise awareness of the problem amongst industry players, politicians and consumers. At the same time, the association highlights the importance and effectiveness of industrial property rights. It also increases consumers' appreciation of creative achievements, by showing them first-hand that the development process for a product, from the initial idea through to market maturity, requires a great deal of time, money, know-how and ingenuity. This is also reflected by the mock award's trophy – a black gnome with a golden nose – which symbolises the immense profits that unimaginative counterfeiters generate, literally at the expense of creative designers and the industry.

You can find the full press release from Aktion Plagiarius e.V. here.

Motorservice Group uses cookies saved to your device in order to optimize and continuously improve its websites, as well as for statistical purposes. Further information on our use of cookies can be found here, together with our publication details and data protection notice.

By clicking on “OK” you confirm that you have taken note of the information on cookies, the data protection declaration and the publication details. You can also change your cookie settings for this website at any time.

We place great importance on transparent information relating to all aspects of data protection. Our website contains detailed information on the settings you can select and what effect these settings have. You can change your selected settings at any time. Regardless of the selection you choose, we will not draw any conclusions regarding you as a person (except where you have explicitly entered your details). For information on deleting the cookies, please see the help function in your browser. You can find out more in the data protection declaration.

Change your privacy settings by clicking on the corresponding buttons

These cookies make the website easier to use and save settings, for example, so that you do not have to repeat them every time you visit the site.

Statistics cookies enable us to evaluate the usage behaviour on the website anonymously – without enabling any conclusions to be drawn about you as a person. This enables us to measure the performance of the website and to improve it continuously to offer a better user experience.


Of course, we will always respect the do-not-track (DNT) setting in your browser. In this case, no tracking cookies are set and no tracking functions are loaded.